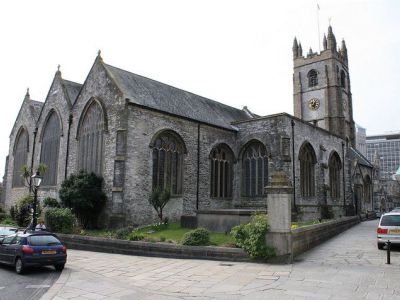 The Minster Church Of St. Andrew, Plymouth (must see)

St Andrew's Church was designated as a Minster Church in 2009 and it continues to operate as the focus for religious civic events for the city and as a bustling evangelical church. It is likely to be on the site of the original Saxon church and was once attached to the abbey of Plympton. The church existed at least as early as the beginning of the 12th century, but by the 15th century it needed to be enlarged because of the growth of the town.

The building can be dated approximately as between 1430 and 1490. It has been restored three times, in 1824 by John Foulston, in 1875 by Sir George Gilbert Scott, and by Sir Frederick Etchells after extensive bomb damage in World War II. The Resurgam Door is a commemoration of this. The length is 185 feet (56 m) and the width 96 feet (29 m). There are two aisles on each side of the nave and one each side of the chancel. The arcades are of the type which is standard in Cornwall at the period. The tower is 136 feet (41 m) high and was funded by Thomas Yogge, a prosperous merchant.
Image Courtesy of Flickr and Robert Cutts.
Sight description based on Wikipedia.