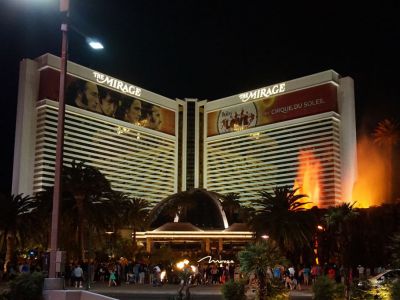 The Mirage is a 3,044 room Polynesian-themed resort and casino located on the Las Vegas Strip. Renowned for its iconic artificial volcano (created by landscape architect Don Brinkerhoff), this mega-resort was built by developer Steve Wynn. The latter is widely regarded to be the father of today's Las Vegas who set a new standard for Vegas resorts.

Prior to The Mirage's opening, the city was experiencing a decline in tourism that started in the 1970s. At that time Las Vegas was no longer seen as a fashionable destination, so a new, high-profile project was necessary to jump-start the ailing industry. Wynn planned for the resort to feature boxing matches to compete against the Las Vegas Hilton and the adjacent Caesars Palace.

He initially considered naming the resort the Golden Nugget, after his Golden Nugget hotel-casino in downtown Las Vegas, but then opted in favor of "The Mirage" because of the resort's South Pacific theme. In 1988, to avoid confusion, Wynn purchased the rights to the Mirage name from two other businesses, the La Mirage Casino and the Mirage Motel, to which he paid each $250,000 to change their names.

The original marquee sign in front of the Mirage is the largest free standing marquee in the world. The resort is connected by a free tram to the Treasure Island Hotel and Casino neighboring the hotel's property to the north.

Other notable features here include: Siegfried & Roy's Secret Garden and Dolphin Habitat, an atrium at the hotel entrance, and LOVE, a Cirque du Soleil theatrical production involving remixes of The Beatles.

The artificial volcano in front of the resort "erupts" nightly at 7pm and 8pm, plus 9pm on Friday and Saturday.
Image Courtesy of Flickr and Matt Kieffer.
Sight description based on Wikipedia.