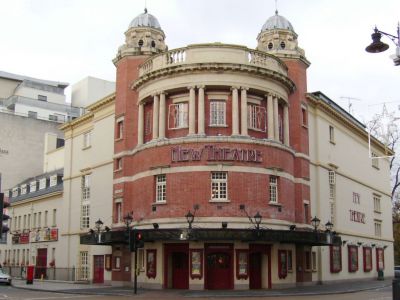 The New Theater, Cardiff (must see)

The New Theatre is one of the principal theatres in Cardiff and celebrated its centenary in 2006. It is located in Cardiff city centre on Park Place, close to Cathays Park. The theatre has a capacity of 1,144, and hosts a number of touring productions including Musical theatre, plays and children's shows and also presents an annual Christmas pantomime.

The building was constructed from brick and Bath Stone and opened to the general public on 10 December 1906. The first public performance was a performance of William Shakespeare’s Twelfth Night. The artists that have performed on stage at the New Theatre have included Sarah Bernhardt, Anna Pavlova, Laurel and Hardy, Tom Jones, Tommy Cooper and Shirley Bassey. The theatre also hosts all the rounds of the Song Prize of the BBC Cardiff Singer of the World competition, apart from the final night, which is held in St David's Hall.
Image by Seth Whales on Wikimedia under Creative Commons License.
Sight description based on wikipedia