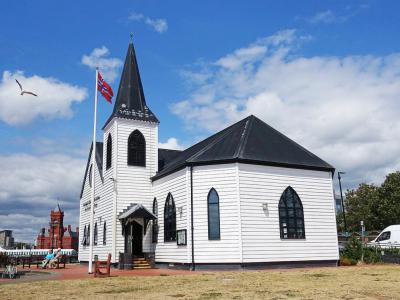 The Norwegian Church in the Cardiff Bay area of the city of Cardiff, Wales, is a historic church building and formerly a place of worship for the Norwegian community in Cardiff. In the 19th century, Cardiff was one Britain's three major ports, along with London and Liverpool. The Norwegian merchant fleet at the time was the third largest in the world, and Cardiff became one of the major centres of its operations. Sjømannskirken – the Norwegian Church Abroad organization, which is part of the Church of Norway – followed in its footsteps and established a church in Cardiff Bay in 1868 to serve the religious needs of Norwegian sailors and expatriates. The building is now used as an arts centre, and is known as the Norwegian Church Arts Centre.
Image by Tiia Monto on Wikimedia under Creative Commons License.
Sight description based on wikipedia

Cardiff has plenty to entertain those who travel with the shopping bags in tow. Locals often call it the "City of Arcades", meaning you can delve down centuries-old alleyways that are bursting with boutiques and jewellers and vintage clothes emporiums, all while sampling locally roasted coffee beans and hopping independent brunch venues. Explore Cardiff's well-preserved and still...  view more