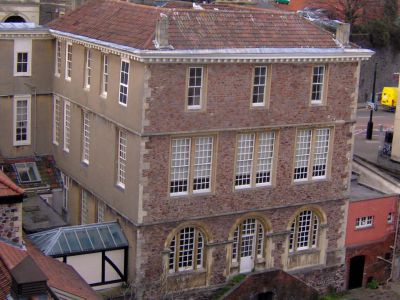 The Red Lodge Museum is a historic house museum in Bristol. It was built in 1580 for John Yonge as a lodge for a Great House, which once stood on the site of the present Colston Hall. James Cowles Prichard wrote The Natural History of Man while living at The Red Lodge from 1827.

It has had several uses in its past, including the country's first girls' reform school. This was set up in 1854 by Mary Carpenter, with the financial help of the poet Lord Byron's widow, who bought the Red Lodge in 1854. The Red Lodge was used as a reform school until 1917.

In the 1920s the site was also the home of the Bristol Savages, who met in a barn-like wigwam built in the garden while the rest of the building belonged to Bristol City Council. Today the building is a branch of Bristol Museum & Art Gallery, along with The Georgian House Museum, Blaise Castle House Museum, Kings Weston Roman Villa and M Shed.

The seven rooms tell the history of the building. The Tudor period is represented by the Great and Small Oak rooms and a bedroom. The print room, parlor and reception room are from the Georgian era, and the Exhibition Room contains a small display on the Red Lodge Girls Reform School, dedicated to the memory of Mary Carpenter. The New Oak Room contains a fireplace from Ashley Manor and paneling from St. Michael’s rectory nearby.
Image by Rodw on Wikimedia under Creative Commons License.