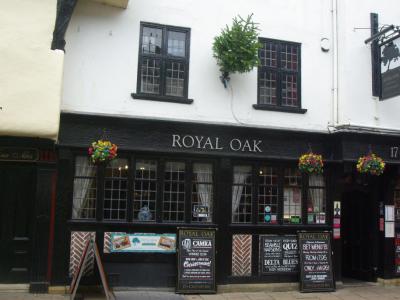 Found on the historic Goodramgate, just a short walk from York Minster and a stone's throw away from Monk Bar, is a perfect spot for real ale enthusiasts to refuel after a day of touristic exploration of York.

The place is called the Royal Oak and it sits inside a 14th-century building decorated in a charming old-fashioned style. There is a high degree of probability that some kind of structure had been on this site since as early as Viking Times. One of York’s oldest pubs started off as a coaching inn. In 1772 it was known as the Blue Boar, which also went by the name Blue Pig under a certain landlord called John Dickinson. Its mock Tudor frontage was added in the 1800s.

The building is reputedly haunted by several ghosts. There is an old prostitute in the front bar; ghosts of children playing by the fire; a tall, gaunt man in the back room and two female ghosts, one on the first floor, called Alice, and one in the flat above the pub, called Mary.

Overall, the Royal Oak offers guests the full Yorkshire pub experience. An array of real ales, including three permanent ones as well as a number of guest ales on tap, is richly complemented by comforting cuisine and some good old Yorkshire hospitality!
Image Courtesy of Flickr and Adam Bruderer.