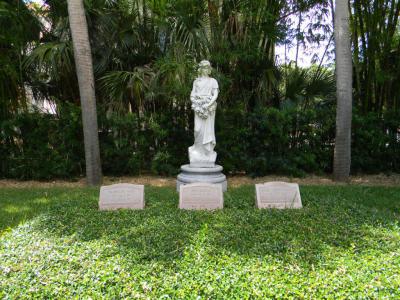 John Ringling died on December 2, 1936, in New York City. He was the longest-lived of the Ringling brothers. John was the only brother to reach his 70s. Once one of the world's wealthiest men, he died with only $311 in the bank. At his death, he willed his Sarasota mansion, the museum, and the entire art collection to the State of Florida.

In 1991, John Ringling, his wife, Mable, and his sister, Ida Ringling North, were exhumed from their original resting places and reburied at the John and Mable Ringling Museum of Art, just in front and to the right of the Ca d'Zan Mansion.

The last resting place of the Ringling family is called the Secret Garden. John Ringling is buried between the two women. There is a locked gate around the three graves and tombstones. During the day, the gate is unlocked and opened. On the anniversary of John Ringling, neighboring New College students will often sneak in and place a cigar on John's grave.
Image Courtesy of Wikimedia and Upstateherd.

Among other things, the city of Sarasota, FL is renowned for its arts community, historical sites and museums. By far the most notable location that fits all the three categories here is the winter estate of the American circus mogul, entrepreneur, and art collector, John Ringling, and his wife, Mable. Indeed, their 66-acre property, turned museum complex, is one of the Gulf Coast’s premier...  view more

Many of the historical buildings in Sarasota are located in the downtown area and most of them are in the Mediterranean revival style. Some of these buildings were designed by the well-known local architect Thomas Reed Martin. Martin designed some 500 residential and public buildings in Sarasota and had a huge impact on the area's architectural style in the early 20th century.