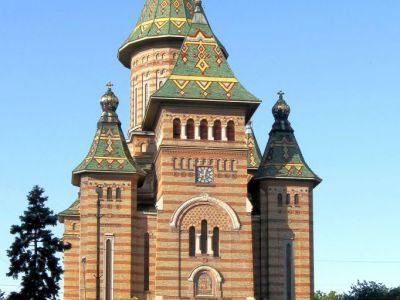 The Timisoara Orthodox Cathedral is a Romanian Orthodox cathedral in Timisoara, Romania. It was built between 1937 and 1940. It is dedicated to the Three Holy Hierarchs, Saints Basil the Great, Gregory the Theologian and John Chrysostom. It has 11 towers, of which the central and the highest are 96 meters high. It is home to many valuable religious objects such as old icons and early writings in Romanian, such as the 1648 Noul Testament de la Bălgrad and the 1643 Cazania lui Varlaam. The building's style is quite unusual among Romanian Orthodox buildings, although it is partly based on local religious tradition and partly on Byzantine architecture. Elements such as niches under the eaves, starry vaulting in the interior and lacquered discs in a variety of colours, can be seen in monasteries such as Cozia or Prislop. The church's interior and exterior paintings were created by the painter Atanasie Demian.
Image Courtesy of Wikimedia and Turbojet.
Sight description based on Wikipedia.