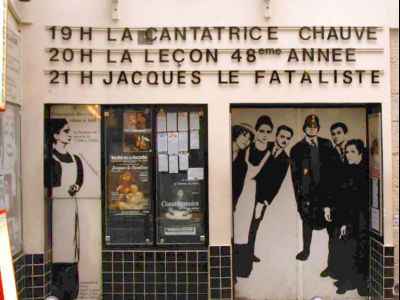 A small theatre in Paris' Left Bank, located in the Latin Quarter, the Huchette Theatre is known for having played plays by the famous play-writer Eugene Ionesco for over 50 years, his absurdist double-bill of The Lesson and The Bald Soprano in permanent repertory since 1957, as "Spectacle Ionesco." Today, a third play is presented and this changes from time to time.

Despite the theatre's tiny size of only 85 seats, a total of over one and a half million spectators have attended the show. In 1952 Marcel Pinard took over as owner and brought to the theatre the works of Jean Genet, Federico García Lorca, Ivan Turgenev, Jean Tardieu, and Eugène Ionesco. Pinard died in 1975, and the theatre was threatened with closure. The actors who had played the Ionesco double bill since 1957 formed a limited company in order to continue production. The theater is claimed to be a true Parisian legend that has to be visited.

Tip:
Every Wednesday, The Bald Soprano and The Lesson are subtitled in English.
The theatre itself is often crowded, especially in the summer months, and the seats are not reserved, so go a little early, join the throng that bustles around the front door and then enjoy the hilarious performances.
Image by Tournachon on Wikimedia under Creative Commons License.
Sight description based on wikipedia