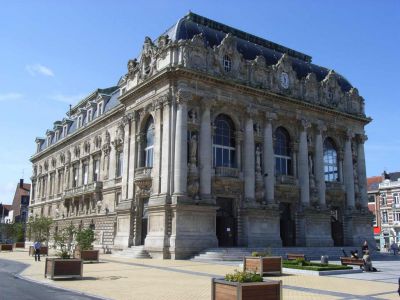 The theatre was built in 1903 and opened in 1905 on a former cemetery used between 1811 and 1871. The first floor of the facade is decorated with statues symbolizing the four arts: poetry, comedy, dance and music. On the second floor, four busts invoke the memory of composer P. Monsigny and the poets A.Lesage, W.Lebrun and Pierre de Belloy, author of "The Siege of Calais", who played in 1765. Located on the square Albert 1st, the edifice can be found right next to the monument built in honour of Joseph Jacquard in 1910, whose invention improved the development of the Calais Lace that made the town wealthy and famous.
Image Courtesy of Wikimedia and Bodoklecksel.