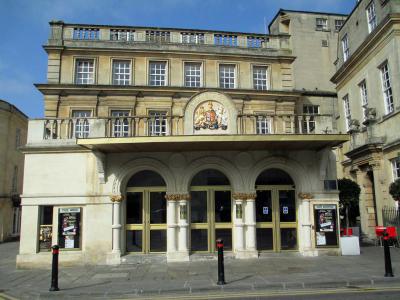 Opened in 1805, The Theatre Royal in Bath remains one of the largest provincial theatres in the UK. Located in the busy Seven Dials area of Bath city centre, the theatre hosts touring plays, musical performances and stand up comedy. The theatre is also the centre of Bath’s renowned Shakespeare Festival, which takes place throughout the month of March. The theatre complex also houses two smaller studio theatres – the Ustinov Studio, which hosts an annual puppetry festival, and The Egg, a newly opened children’s studio which runs regular arts and theatre workshops for children and families.

The Theatre Royal is one of several fine examples of Georgian architecture in the city of Bath. The main theatre building was originally built in 1720, and was designed by architect Thomas Greenway. Local socialite Beau Nash was the first resident of the building, before it was converted into a theatre in the early 19th century. Rebuilt after a fire in 1863, the ornate red and gold interior of the theatre’s 900 seat auditorium was restored as part of a complete overhaul of the theatre in 2010. The Rivals, a play set in Bath’s Georgian heyday, premièred to commemorate the theatre’s restoration and reopening.
Image by Keith Daulby on Wikimedia under Creative Commons License.