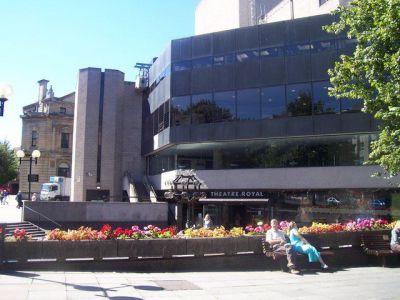 The Theatre Royal consists of a large main auditorium that can produce West End musicals, opera and ballet; a smaller experimental theatre called The Drum; and, on a separate site, a production and education centre known as Theatre Royal 2. Theatre Royal was designed in 1977 by the Peter Moro Partnership, which had already designed a number of new theatres around the country. Building started in 1979 and the theatre was officially opened on 5 May 1982 by Princess Margaret.

The Theatre Royal comprises 1315 seats, but has a unique ability to compress the auditorium, creating a more intimate performance space of 787. It has a steep auditorium with two galleries and very large proscenium arch. The range of work presented and produced is extensive and includes major touring drama and musical productions, as well as leading opera and dance companies (including Birmingham Royal Ballet, Rambert Dance Company, Glyndebourne On Tour and Welsh National Opera). The Theatre Royal also produces its own drama and musical productions each year, usually with commercial or subsidised partners. Many tour nationally or transfer to the West End.
Image Courtesy of Wikimedia and Lewis Clarke.
Sight description based on Wikipedia.