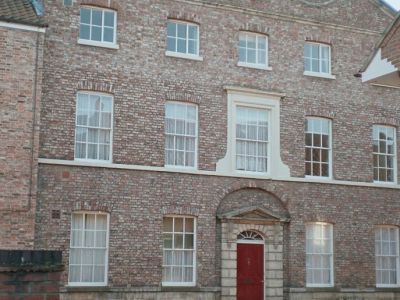 Thomas Atkinson, an 18th century English architect, is famous for remaking the Bishopthorpe Palace in York in the Gothic Revival style. Though a rather influential figure of his time, very little is known about Atkinson's private life. His house, located at 20 St. Andrewgate, is one of the sparse evidences of his life in York.

Atkinson was born at York, the son of Thomas and Jane Marshall Atkinson. His father was a mason. He worked with his father and later developed an architectural practice based in York. The house that he built there for himself in about 1780 still stands in the city center. He was the leading Yorkshire-based architect of the second half of the 18th century.

Atkinson converted to Roman Catholicism; he received a number of commissions from the Yorkshire Catholic gentry. He was commissioned to design a new chapel for Bar Convent. The dome was concealed beneath a slate roof, so that it was hidden from view. Atkinson also built eight different escape routes into the Chapel, to ensure that if the building was stormed, the worshippers would be able to escape. In 1776, he produced designs for a planned development of the city of Sheffield which never came to pass.
Image Courtesy of Wikimedia and GuillaumeTell.
Sight description based on Wikipedia.