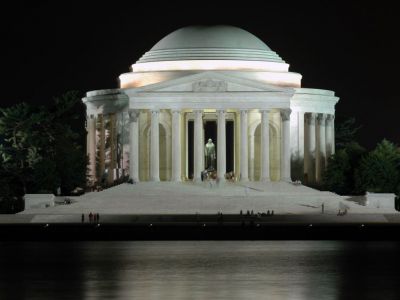 The Thomas Jefferson Memorial is located in Washington, D.C. and stands on the banks of the Potomac River. It is one of the least visited memorials, probably because it is not part of The Mall, so visiting is usually relaxing. It is located just south of the White House which makes for a very scenic setting.

The idea for the memorial originated in 1901. After much debate and several design changes, the memorial was finally dedicated on April 13, 1943. That date is significant because it was the 200th celebration of Thomas Jefferson’s birth. Part of the debate surrounding the memorial is its size. There were conflicting opinions about whether the memorial was too big as opposed to those who thought Thomas Jefferson, as one of the Founding Fathers, deserved a memorial on the scale of the Washington Monument or the Lincoln Memorial.

In the end, Jefferson’s love of classical architecture won out and the large classic structure was built. This open building with its beautiful sweeping portico is very picturesque. Under the dome, there is a 19-foot tall bronze statue of President Jefferson. This is not the statue that was present at the dedication. Bronze was in short supply during the war effort and the original statue was made of plaster and painted to look bronze. The present statue was installed four years after the dedication.

On the walls around the statue are inscriptions of Jefferson’s writings. An interesting fact for history buffs is the inscription of the Declaration of Independence. Mr. Jefferson wrote “inalienable rights” but in the final document it was “unalienable rights”. In the Jefferson Memorial, the inscription is as he wrote it. While the area is pretty any time of year, during cherry blossom season the site is absolutely breathtaking. The cherry trees planted around the area are a gift from the people of Japan.

The Jefferson Memorial is open 24 hours a day, and rangers are present from 9am to 11:30pm except on major holidays.

Why You Should Visit:
Terrific spot to people watch and take in the DC skyline while sitting on the memorial's many steps.
Its backsides are often forgotten about but are also good for taking in the views and architecture.
Located at the back of the Tidal Basin, this is one of the most iconic and calming sites in DC.

Tip:
Make sure to check out the bookstore and educational displays downstairs. Restrooms available there too.
Image Courtesy of Wikimedia and Daniel J. McLain.
Sight description based on Wikipedia.