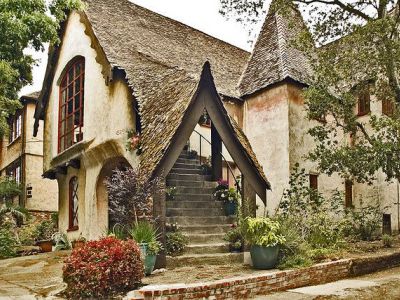 Thornberg Village, also known as Normandy Village, is a residential neighborhood at Spruce Street and Hearst Avenue. The village was the brainchild of Jack Wood Thornburg. The 25-year old had already constructed a number of buildings in the area in storybook style. His next venture was to create a self-contained neighborhood using French-Norman, Scandinavian and Mediterranean influences.

The goal was to build an area that consisted of homes, shops and restaurants, all with the old-world style of brick and stone facades, steep gables, tower rooms and turrets. Unfortunately for Thornburg, zoning prevented him from achieving the commercial goals he desired. Instead, each of the units became residential spots where locals have continuously owned and rented room since the area was completed in 1927.

Tourists can walk through Thornburg Village to see homes that appear as though they have transported themselves directly from the pages of a European storybook. The interiors cannot be viewed by the public as they are private homes, but it is easy to imagine the stone walls, oak floors and beamed ceilings that are held within.

Not all of Thornburg Village is original. The area was expanded once in 1928 and again in 1955. There are now parking structures for the residents, but these are hidden from street view so as not to distract from the overall appearance.

Thornburg Village was declared a Berkeley Historical Landmark in 1983.

Tips
These private homes are currently occupied. Therefore, visitors should make sure they are respectful of the property during their visit.
Image by Ken Osborn on Flickr under Creative Commons License.