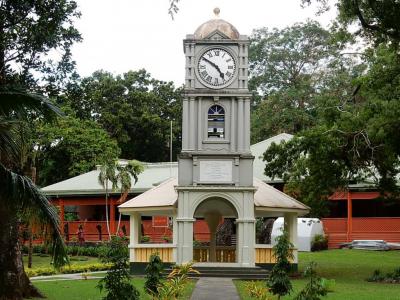 Thurston Gardens was opened at the present site on August 15, 1913. (It had been previously situated in another neighborhood). The most prominent landmark in the park is the drinking fountain, erected by Mayor Henry Marks in January of 1914. Shortly after its inauguration, Mayor Marks was drowned in the St. Lawrence River, Canada, through the sinking of the S.S. Empress of Ireland, May 23, 1914. In his memory an octagonal bandstand, with its classical, columned clock tower was opened by the governor, Sir Bickham Sweet-Escott, on June 7, 1918.

The Fiji Museum, which is adjacent to the east end of the park, was founded on a collection presented to the Suva Town Board by former Gov. William Allardyce in 1904.

Among the exhibits are collections of war clubs, ivory necklaces, cannibal forks, spears, bowls, pottery, tools, cooking utensils, combs, and a replica of a huge drua, an ancient, double-hulled canoe. One of the war clubs, used in battle, has several notches chiseled in it, each representing an enemy slain.

The rear of the museum is dedicated to the arrival of European and U.S. sailing vessels, highlighting the bêche-de-mer, whaling and sandalwood eras. There is also an exhibit illustrating the saga of the Indian indenture period, and the infamous blackbirding trade that brought Micronesians and Melanesians to Fiji. In addition, you’ll see actual relics from the legendary HMS Bounty. There is also a superb collection of old masi (tapa bark cloth) in an air-con room.

Tips:
The Ginger Café, on the Museum’s deck, is a wonderful place to take a break and congratulate yourself for completing the walking tour. It’s a great spot to chill if you’re waiting to catch a cab back to your hotel.
Image Courtesy of Flickr and Michael Coghlan.