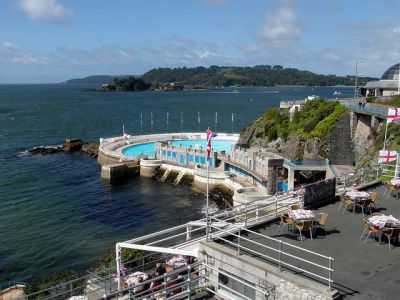 Tinside Pool is a unique 1935 Art Deco lido sited beside Plymouth Sound and is overlooked by Plymouth Hoe and Smeaton's Tower. The lido is open in the summer months between May and September. The lido was officially opened on 2 October 1935. A victim of declining popularity and neglect, the lido closed in 1992 but a vociferous local campaign led to a renovation, at a cost of £3.4 million, and Grade II Listed Building status in 1998.

The facility re-opened to the public in 2005. A lift and hoist were added in 2009 for disabled access. The lido design is a semicircle of 180 feet diameter (55 metres). There is a large central fountain and two smaller side fountains. The lido is floodlit at night, originally the lighting went through three decorative colour changes. Sun loungers and deckchairs are available for hire.
Image Courtesy of Flickr and Reading Tom.
Sight description based on Wikipedia.