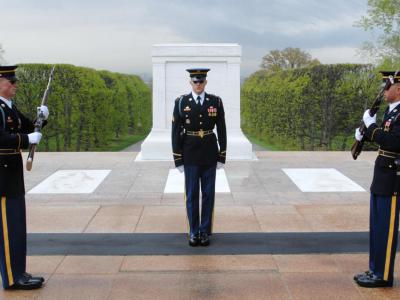 Dedicated in 1921, the tomb represents a large white sarcophagus, containing the soldiers' remains, set on a hill overlooking Washington, DC. The World War I "Unknown" is a recipient of the Medal of Honor, the Victoria Cross, and several other foreign nations' highest service awards. The U.S. Unknowns who were interred here are also recipients of the Medal of Honor, presented by U.S. Presidents who attended their funerals.

The tomb is guarded 24 hours a day, 365 days a year by Tomb Guard sentinels from the elite 3rd U.S. Infantry Regiment. The Changing of the Guard ritual is quite elaborate and somber a ceremony during which a sentinel seamlessly takes over guard duty from the previous sentinel, and it also implies a special march and salute. The ceremony is held every hour during October-March or each half-hour during April-September.
Image Courtesy of Wikimedia and Sgt. Erica Vinyard, U.S. Army.
Sight description based on Wikipedia.