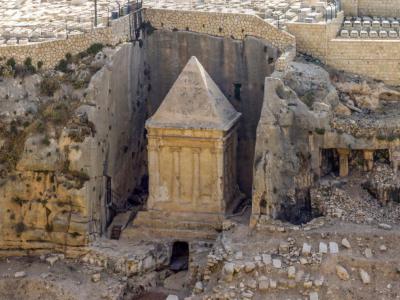 Adjacent to the Tomb of Benei Hezir and a few meters from the Tomb of Absalom, this grand monument in the Kidron Valley was built in memory of Zechariah, a minor prophet in the Old Testament that the Book of Chronicles records to have been stoned:

"And the Spirit of God came upon Zechariah the son of Jehoiada the priest, which stood above the people, and said unto them, Thus saith God, Why transgress ye the commandments of the Lord, that ye cannot prosper? because ye have forsaken the Lord, he hath also forsaken you. And they conspired against him, and stoned him with stones at the commandment of the king in the court of the house of the Lord."

Completely carved out of solid rock (truly a grand feat to accomplish!), the monolith stands out for its pyramid-shaped upper part; however, the overall style of the construction, which includes Hellenistic details such as Ionic columns, is similar to that of the Tomb of Benei Hezir, and several authors think that they are near-contemporary with one another. Scholars specializing in funerary practices and monuments have ascribed a first-century CE date to the Tomb of Zechariah.

Spectacularly large, it sits amid the oldest and largest Jewish cemetery in the world, and can be climbed by visitors for nice views of the valley.
Image by Andrew Shiva / Wikipedia / CC BY-SA 4.0 on Wikimedia under Creative Commons License.