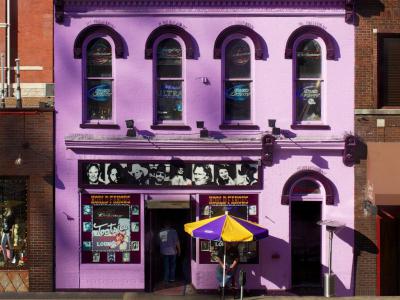 Despite being neither a singer nor a songwriter, Hattie Louis Bess – better known as Tootsie – has been inducted into Nashville's Country Music Hall of Fame. Founder of the most celebrated honky-tonk bar ever conceived, she purchased the building standing right behind the Ryman Auditorium in 1960. Originally called Mom's, the name was changed to Tootsies Orchid Lounge when a painter painted the lounge purple. Today, the exterior color remains unchanged.

History was made at Tootsie's. In the early days, Willie Nelson, Patsy Cline, Mel Tillis, Kris Kristrofferson, Waylon Jennings, Roger Miller and other famous country musicians hung out here (the former received his first songwriting gig after singing at Tootsies). At her funeral in 1978 (she was buried in an orchid gown), Roy Acuff spoke and Connie Smith sang some of Tootsie's favorite hymns. A 60-minute documentary, "Tootsie's Orchid Lounge: Where the Music Began", was released in 1996.

Plastered throughout the bar are pictures and memorabilia of past and present individuals who have influenced country music, along with pictures of hopefuls and never-wills who came to Music City chasing their dreams. Tootsie was known to slip $5 and $10 bills into the pockets of luckless singers, writers and pickers.