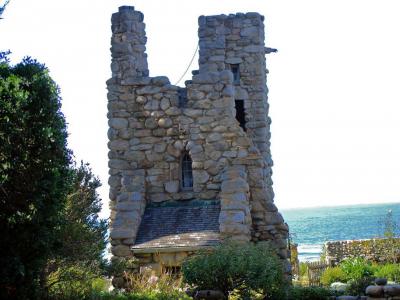 Tor House and Hawk Tower were the home of poet Robinson Jeffers and family from 1919 to 1999.

The two structures, often referred to jointly as Tor House, are generally believed to have played a crucial role in the development of Robinson Jeffers as a poet, and have inspired many a visitor; for example, Stewart Brand, founder of the Whole Earth Catalog:

"Tor House is a poem-like masterpiece. It may express more direct intelligence per square inch than any other house in America."

The Jeffers family moved into Tor House in August 1919—after Robinson Jeffers had worked as an apprentice in its construction—and lived there for the remainder of their lives. Donnan Jeffers, one of the couple's two sons, lived with his family in the neighboring east wing of the house. They remained there until Donnan and his wife Lee died.

Jeffers named it Tor House after the type of ground on which the house was situated, a granite outcrop that might have been known as a "tor" in southwest England. He described the land he chose as the site for the house as being like a "prow and plunging cutwater" of a ship. The Carmel area's influence in Robinson Jeffers' work becomes apparent in his poems such as his work "The Purse Seine", a poem about the local fishing industry.

Jeffers' routine was to work on his poetry in the attic in the morning and to work on his building projects, such as Hawk Tower and expanding Tor House, in the afternoon.

After completing a stone garage and wall on his own, Jeffers started work on a tower that would take him four years to complete. He began construction in 1920 at the behest of his wife Una. The stonework for the tower was completed in late 1924. The woodwork was completed by a paid carpenter in 1925. Jeffers named the tower Hawk Tower, purportedly after a hawk that appeared often while he was building the tower, but stopped appearing after he finished construction. He appeared to adopt the hawk as his symbol at the time, placing Una's symbol (a unicorn) above her second-floor door and a hawk above the door to his third-floor lookout.

It was while Jeffers was engaged in building Hawk Tower between 1920 and 1924 that Jeffers is thought to have discovered his voice as a poet. He compiled and printed a limited run of the book Tamar and Other Poems well into the final year of tower stonework. He was not able to find a major publisher for the book until several editors from the Book Club of California discovered him.