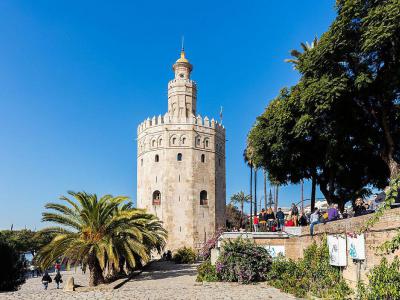 Gold Tower is a dodecagonal military watchtower in Seville, built by the Almohad dynasty in order to control access to Seville via the Guadalquivir river. Constructed in the first third of the 13th century, the tower served as a prison during the Middle Ages. Its name comes from the golden shine it projected on the river, due to its building materials (a mixture of mortar, lime and pressed hay). The tower is divided into three levels, with the third and uppermost being circular in shape and added in 1769. The smaller and octagonal Silver Tower is nearby and is believed to be built in the same era.

At one point in the last two centuries the tower came under threat when the adjacent road needed widening but faced by strong opposition from the locals the demolition idea was dropped. In 1868 it was put up for sale as scrap but this too was vehemently rejected by the city's inhabitants. Today the tower, having been restored, is a naval museum containing engravings, letters, models, instruments and historic documents. The museum outlines the naval history of Seville and the importance of its river.
Image Courtesy of Wikimedia and Diego Delso.
Sight description based on Wikipedia.