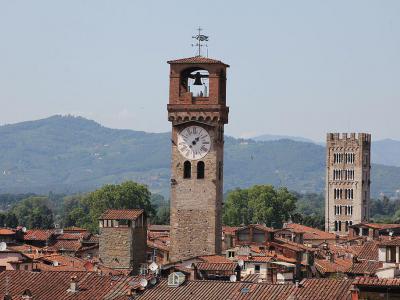 Back in the Middle Ages, the towers of Lucca had been growing like mushrooms, with some collapses being rather commonplace. The towers were built higher and higher in the belief of their owners that the height equaled respect. In the 14th century, Castruccio Castracani, the Duke of Lucca, ordered a good number of them to be demolished.

Among the tallest towers still in place is the Clock Tower. Built in the 13th century, it stands 164 feet high on the corner of Via Fillungo and Via Dell'Arancio. Several families of the local nobility had owned the tower over the centuries, but it is better known for a dark legend involving a woman and the devil.

Lucida Mansi, a cruel beauty notorious for having killed her husband and many lovers after that, wanted to stay young forever. Mad at the sight of wrinkles on her face, she made a deal with the devil that would keep her young for the next thirty years, upon which he would claim her soul at the midnight of the 14th of August 1623.

Indeed, for the next three decades Lucida had enjoyed a fabulous life filled with extravagance, luxury, and numerous romances. People marveled at her youth whilst others grew old.

As the day of 14th of August 1623 drew nearer, Lucida grew more and more desperate. In a bid to stop the clock from chiming midnight, she climbed to the top of the tower but still failed to halt the bell strike, and so the devil took her soul.

There are 207 wooden steps within the tower leading to the clock mechanism. Entrance costs only a few euros, so it would be a shame not to see it.
Image Courtesy of Wikimedia and Gianni Careddu.