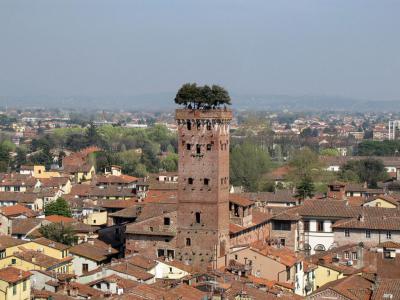 The Guinigi Tower is easy to spot. It is a square tower of bright red brick. It rises to a height of 125 feet and there are Holm oak trees growing on the roof. There is a need to climb the tower, sit in the shade of aged oaks and look out over the ancient city of Lucca. Alert: this urge is irresistible.

The Guinigi Tower was built in 1384. The Guinigis were rich from the silk trade that passed through Lucca at the time. Once Lucca had as many as 250 such towers. Only nine remained after the warlord Castruccio Castracani ordered them demolished. This was in the 14th century, the interesting time of plagues, raids, violence. It was a time for towers.

The towers were not only havens and defensive assets, they were symbols of wealth and power and respect. Every player had to have one. At least one. When Castracani died, the Guinigi took over the city. They would keep their Tower of Power forever.

In 1805 Napoleon ruled in Tuscany. He gave the region to his sister, Elisa, making her the Grand Duchess of Tuscany. It is because of her the walls of the Tower were maintained. It is possible to visit the tower. It is 230 steps up to the observation deck. The original stairs were on the outside. Now they are inside. It's a small mercy.

Of course there are legends about the tower. If one climbs to the top in the evening, one may see a ghostly lady sitting under an oak tree with her pet dog. This is the lady Ilaria, the deceased wife of Paolo Guinigi. If she smiles at you, your heart is pure. If not, well...

The tower is open to the public for a modest fee. Reach the top and the amazing panorama of Lucca will unravel at your feet.
Image Courtesy of Wikimedia and LivornoDP.