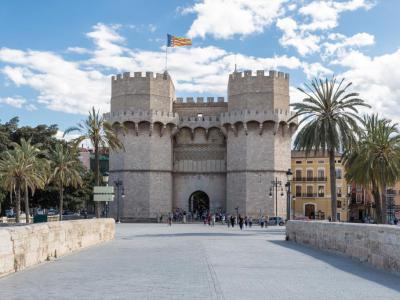 The Serranos Towers are one of two sets of towers along the gateway into the old city section of Valencia, with the Quart Towers being the other smaller and younger pair of towers. This particular gateway is the largest of its kind in Europe. They were constructed during the 14th century, a full 100 years before its younger brother. Construction was completed in 1391. The towers was part of the defensive structure protecting the city. At one point in time, prisoners were also housed here.

The towers are reasonably high so you can see over the city rooftops towards the Valencia Cathedral, while on the other side you can walk part of the old ramparts which give you a view of the Turia River. The towers have often been used for festivities and important occasions. Parades would be led through the archway.

The structure is pentagon-shaped and has a common gallery that connects the two sections. The design is classic gothic. When you climb to the top of the tower, you can also see the outlines of the old moat down below.

Why You Should Visit:
A nice part of Valencia history, still well maintained and preserved, and seeming to have some kind of friendly spirit.

Tip:
It is well worth paying to go inside. It takes less than 30 minutes to walk in and climb. In the square at the base of the tower, there is a good cafe/bar to refresh afterwards.