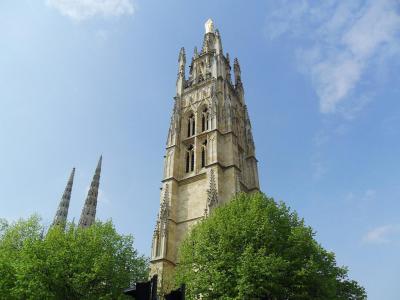 The Tour Pey Berland, which translates as Pey Berland Tower, is a church bell tower belonging to the city’s Cathedral Saint-André. Like the tower at the Basilica of Saint-Michel, it is completely separated from the rest of the cathedral. Officially the Saint-André tower, it is locally named after Pey Berland, the former Archbishop of Bordeaux, who funded and designed it.

The Pey Berland Tower stands on its namesake Place Pey Berland in the center of the historic city center, on the west bank of the Garonne. The tower was commissioned in 1440, but took sixty years to complete, opening in 1500. The intervening years marked a major change within the city, as it began the period a loyal English city, but returned to France in 1851. Berland abdicated his position and died shortly afterward.

One of the city’s most recognizable landmarks, the Pey Berland Tower was completed in the 15th century and built in the Gothic style. Visitors are able to climb the tower and enjoy views across the city center and the Garonne to the East. Admission is free for EU residents under 26 years old.

Why You Should Visit:
More exciting and fun than a roller coaster! If you've got a good head for height and a tolerance for steep/narrow winding staircases, this is it!
Even just seeing a cathedral from above is architecturally illuminating, never mind the amazing 360-degree views of the city.

Tip:
Note that at busy times, you may have to wait as there are limits to the numbers that can go up at one time.
It's a strenuous 15-minute ascent, so if you're in any doubt it's better not to try.