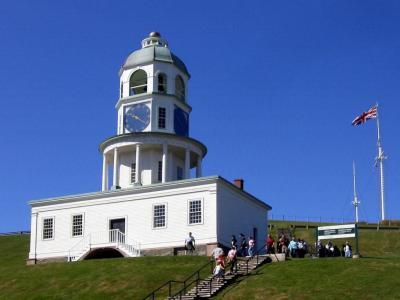 The clock tower is a three-tiered (three storey), irregular octagon tower built atop a one storey white clapboard building of classic Palladian proportions. It was erected on the east slope of Citadel Hillfacing Barrack (now Brunswick) Street. The clock face is 4-sided displaying Roman numerals. As with most clocks the "4" is shown as IIII for aesthetic symmetry and not as IV. Its bell strikes hourly and quarterly and the durability of the mechanism (which dates to the original installation) is attributed to its slow movement. The Town Clock began keeping time for the garrison on October 20, 1803.
Image by lisabirtch on Flickr under Creative Commons License.
Sight description based on wikipedia