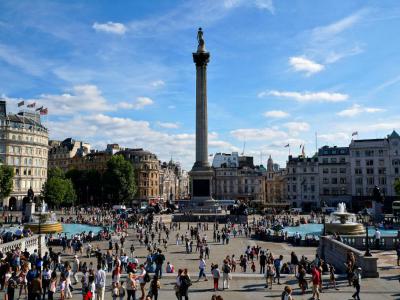 Trafalgar Square is a #1 square in Britain and is as close as you can get to the heart of London. Charing Cross, the small traffic island south of Trafalgar, is technically where all distances to London are measured from. Speaking of measures, the Imperial Standard measures used in the UK prior to 1965, such as inches, feet, yards, links, chains, perches and poles, are all found in Trafalgar Square as well. In 1876 they were installed in the northern terrace wall, but in 2003 were relocated behind the cafe and placed along the steps, after the north side of the square was made pedestrian.

The story of Charing Cross itself is quite remarkable and starts in 1290 when Eleanor, the wife of king Edward I, died and her body was taken from Lincoln to Westminster Abbey. On the way, the procession stopped at 12 different locations including the village of Charing. At each of those stops, a memorial Eleanor Cross was erected. The memorial cross in Charing was eventually destroyed during the Civil War in the 17th century and was rebuilt only in the Victorian era, in the 1860s. Mistakenly, however, they put it in London, outside Charing Cross Station, and not in the Charing village.

Trafalgar Square owes its name to Admiral Lord Nelson who died on 21 October 1805 at the Battle of Trafalgar. That battle was part of a Napoleonic war and saw British, led by Admiral Nelson, take on the combined French and Spanish fleet. The Royal Navy enjoyed a remarkable victory that day, commemorated since as the greatest victory in its history. In memory of that event, the name “Trafalgar Square” was coined in 1835.

Eight years later, another tribute to Lord Nelson – Nelson's Column – was erected in the center of the square. The column was built of Devon granite and adorned, around its base, with four bronze reliefs depicting Nelson's most famous battles: St Vincent, Copenhagen, The Nile, and Trafalgar. Four guardian lions at its foot appeared in 1868 and were made initially of stone. The ones we see today are cast in bronze and replace the originals considered not impressive enough. The bronze statues were created by sculptor Edwin Landseer and modeled on real lion corpses to ensure ultimate physiological accuracy. Despite that, however, a serious blunder was committed about the lions' backs. In real life, the back of a lying lion is always convex, not concave, as it is in the sculpture.

In 1845, in order to reduce space for public gatherings in Trafalgar Square, two fountains were added, designed by Charles Barry. Eventually, they had to be replaced with new fountains, while the original old ones were gifted to Canada. To oversee public gatherings in Trafalgar, in 1926 a one-man police phone box was installed in its south east corner. Today, it is used solely by cleaners as a storage room.

Why You Should Visit:
Great place to relax over an evening, surrounded by so many traditional London buildings.

Tip:
Go sit on the steps as the sun starts to set, take in the noises of London...
...or use Trafalgar Square as a starting point for London's attractions.
Image Courtesy of Flickr and a.canvas.of.light.