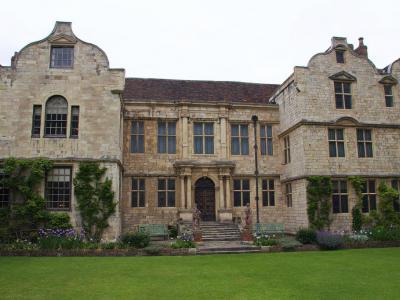 In the care of the National Trust since 1930 (it was one of its first major properties), and tucked away behind the Minster, the Treasurer's House has both a lovely garden and fascinating collection of art and antiques.

The name derives from it being on the site of the medieval house of the Minster's Treasurer, a post abolished at the Reformation. The present building dates from the 17th century, but had been added to with various accretions and was actually three separate houses when in 1897 it was bought by Frank Green (1861-1954).

Green was a wealthy local industrialist and used his considerable wealth and educated taste to restore the house to what he thought it should look like in its heyday, albeit with a central great hall which was entirely of his own imagination.

He was an early collector of antiques, and his aim to deliver a home as a showcase for his collection of furniture, paintings and other treasures, with great attention to paid to the detail of their presentation. Each room was designed in the style of a different period as a setting for his period furniture collection.

He was famously fastidious – not to say fussy – and the house abounds with notices telling the staff what to do and how to behave, and metal floor studs to indicate the exact position of the furniture. It is said he even wandered around to check on things at night! A bachelor, he gave the house to the Trust in 1930, while he moved on to Ashwick House in Somerset.

Visitors can wander on their own, and there is an audio guide available on request, as well as braille and large print guides. In each room, there is a separate guide to the paintings on display. Afterwards, the gardens make a great place to escape the touristy bustle of the city.

Tip:
To reach the cellar and attic you need to go on an accompanied tour: the cellar tour is mainly of interest to ghost enthusiasts (there are still people who claim to see them!), while the attic tour gives a great insight into the servants' lives. You can also have a wander round the very pleasant, photogenic garden and go down in the basement to find a reasonably priced tearoom, toilets, and maybe a ghost or two.