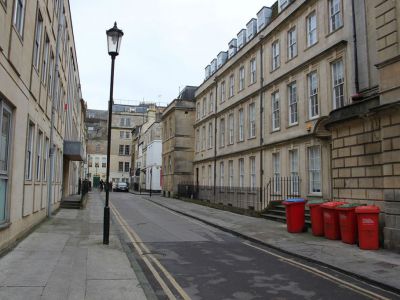 Trim Street in Bath is a historic street, built in 1707, full of shops and houses, many of which are listed buildings. It was named after George Trim, who owned the land. Number 5, which is also known as General Wolfe's house, is a two-storey building with a parapet and rusticated quoins, built by Thomas Greenway. The doorway has Ionic pilasters and a tympanum decorated with the implements of war. General James Wolfe was staying in the house when William Pitt, the elder commanded him to lead an expedition to Quebec. Numbers 6 and 7 are three-storeyed houses with a mansard roof, as are numbers 8 and 9. Number 10 dates from the late 18th century. It has three storeys plus an attic and mansard roof. The doorway has Doric columns and a pediment. Numbers 11 to 14 form a block of three- and four-storey buildings now used as shops, while the four-storey block at number 15 to 17 is still residential.
Image by Rodw on Wikimedia under Creative Commons License.
Sight description based on wikipedia