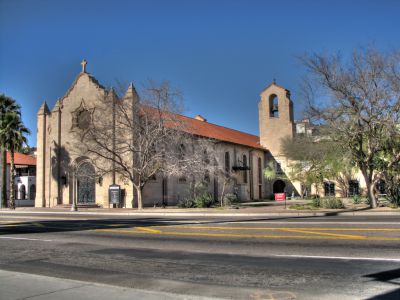 The Trinity Cathedral is the home of one of the oldest Episcopal Churches in the city of Phoenix. It is located on Roosevelt Street, in the heart of the historic Roosevelt District. If was founded in 1885, well before the State of Arizona joined the Union. It was modeled in a four sided shape.

The Cathedral House was finished in 1915, and represents one side of the quadrangle. The Cathedral itself is on another. Atwood Hall, which was completed in 1931, represents a third side. The first worship services were held here in 1920, on Christmas Day. In 1988, this place became the Cathedral for the Diocese of Arizona.

The building is done in a Spanish Revival style of architecture. One of the highlights of the building is the grand Organ in the sanctuary. It is a four manual, 71 rank pipe organ, built by the Schantz Organ Company. The grand piano in the worship area was hand made by Bosendorfer of Vienna, Austria.
Image Courtesy of Wikimedia and Eric Brimhall.