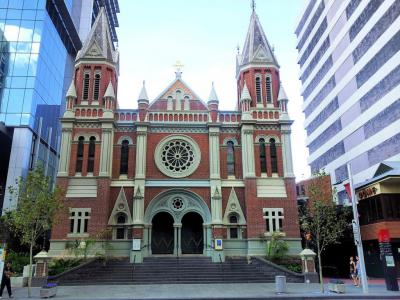 The Trinity Church congregation was established by Henry Trigg, a practising Congregationalist, who arrived in the Swan River Colony in 1829. Trigg initially attended the first Anglican Church, where he was a choirmaster. He later joined the Wesleyans, but from 1843 he held prayer meetings in the Congregational tradition in his own home.

In 1863, the congregation decided to build a chapel in St Georges Terrace as the premises in William Street were too small. Land was purchased for £350. The architect of the new church was Richard Roach Jewell. Governor John Hampton laid the cornerstone on 10 May 1864. The church was constructed by Thomas Smith and William Buggins, in 1865.

On 4 August 1892, the proposal was put that a new church be constructed, in front of the existing one, at a proposed cost of £5,100, with the erection of an adjoining suite of offices to fund the building of the church. This was accepted and Trinity Church was dedicated in December 1893 and opened in 1894. The Church also commissioned a two-storey office building, Trinity House, adjacent to the new church building and facing St Georges Terrace.
Image Courtesy of Wikimedia and Orderinchaos.
Sight description based on Wikipedia.