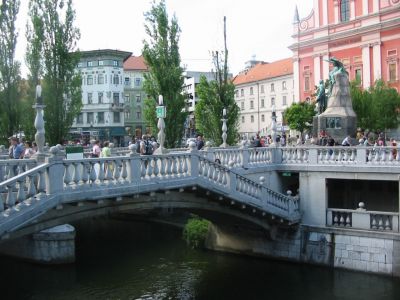 The Triple Bridge is a group of three bridges that cross the Ljubljana River. The bridge connects the historical city to the modern city.

A bridge has been at this location since 1280. The bridge was first called Old Bridge, then Lower Bridge. It was also known as Spital Bridge. In 1842, a new bridge was designed and named Franz's Bridge. This bridge featured two arches and a metal fence.

In 1929, architect Jože Plečnik designed two footbridges to ease congestion on the 1842 stone bridge. The original bridge handled both vehicle traffic as well as pedestrian traffic. The two additional bridges were completed in 1932 and were designed to handle pedestrian traffic, leaving the middle bridge for vehicles. In addition, the metal fencing on the original bridge was removed, and massive stone balustrades and lamps were added to each bridge.

All three bridges have been pedestrian-only since 2007. Today, visitors and locals alike frequently use these beautiful bridges. Stairways on either side of the bridge lead visitors to the terraces along the Ljubljanica River. The stairways resemble Venetian bridges and bring a Mediterranean flair to Ljubljanica.
Image Courtesy of Wikimedia and Andrejj.