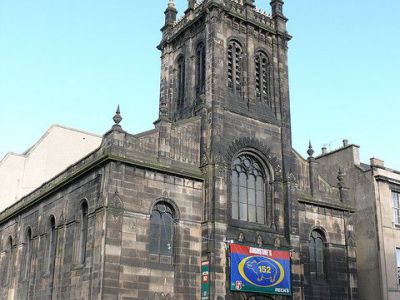 While in Edinburgh, surely taking a walk along the Royal Mile between Edinburgh Castle and the Holyrood Abbey, you will see on the one side of this famous street the Tron Kirk Church.

This once beautiful church was built in the 17th century on the orders of King Charles I. Its Palladian and Gothic design had a Dutch influence, inspired by architect John Mylne, who had been impressed by the “Architectura moderna” churches designed by Hendrick de Keyser.

The original building was T-shaped, conforming to the then modern 17th century religious practices, but was re-designed in 1787, when the South Bridge was built. In 1820, the wooden spire was destroyed in a fire and the stone spire, seen today, was installed in 1828.

The building was de-consecrated in 1952 and has been used for various purposes ever since, including a tourist information centre and Black Heart Entertainment who organised ghost tours around the city.

In the 1970s, excavations carried out in the crypt discovered remains of Marlin’s Ward, including the cellars of an ancient building, a part of a paved street. These can now be viewed when the building is open to the public.

For several years the church has been the subject of a lively debate. Some want to knock it down, while others want it restored. In the meantime, it gets a little more dilapidated while people fight over its fine architecture and it would be a shame if this well-known landmark disappeared.
Image Courtesy of Flickr and shimgray.