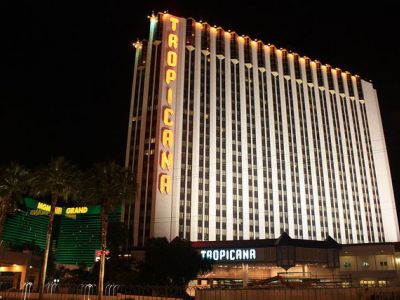 Until 2013, the Tropicana Las Vegas Hotel on the Strip housed the popular, yet ill-fated show, called Las Vegas Mob Experience, outlining the influence of organized crime on the creation of the world’s most important gambling city.

The interactive tour chronicled the rise and fall of the Mafia in the Las Vegas Valley, mixing entertainment with history, storytelling, artifacts and technology. Visitors were taken on a journey through the world of organized crime, interacting with live character actors and 3D holograms of famous mob movie icons and celebrity gangsters, such as James Caan, Frank Vincent, Tony Sirico and Mickey Rourke. The Experience also featured original photos, videos, letters, personal effects and other artifacts belonging to the infamous gangsters, such as Benjamin "Bugsy" Siegel, Meyer Lansky, Sam Giancana, Tony Spilotro, Mickey Cohen, Charles "Lucky" Luciano and Joey Aiuppa.

The hotel itself had been in and out of financial troubles for a good 25 years bouncing around a succession of owners and managers, some legitimate and some not so much, linked to the mob in Chicago, Milwaukee and Kansas City, until eventually it got a $180 million renovation.
Image Courtesy of Flickr and dherrera_96.
Sight description based on Wikipedia.