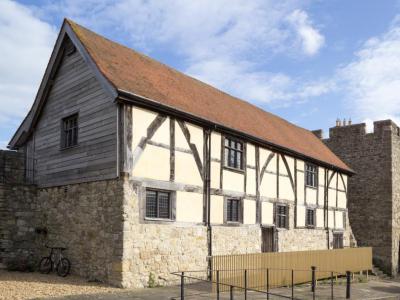 Hidden away amongst the Medieval old town walls of Southampton, this hall – currently known as Westgate Hall – was built before 1428, and originally stood in St Michael’s Square. Its upper floors were used as a cloth hall and the open arcaded ground floor as the town’s fish market.

By the 17th century, the building had become derelict. In 1634 it was sold, taken apart and moved to its present location to be used as a warehouse, whilst the arcade on the ground floor was walled up, creating the hall we see today.

Westgate Hall was restored in the 1970s to create a picture-perfect venue with its lovely vaulted ceilings and exposed beams contributing to an outstanding character. Now beautifully decorated, this 15th-century timber-framed venue is used for public gatherings such as civil marriages, wedding receptions, private parties, concerts, lectures, meetings and conferences.
Image Courtesy of Wikimedia and Richard Nevell.
Sight description based on Wikipedia.