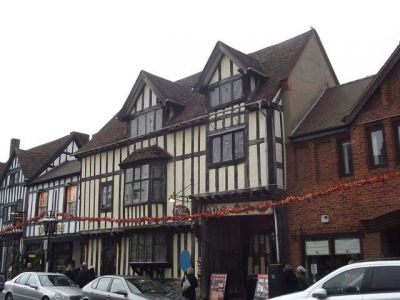 Tudor World is a Museum of everyday life in the time of the Tudors. It is located on Sheep Street, Stratford-upon-Avon, almost exactly in the center of town. The museum operates several different tours including the Walking tour with William Shakespeare himself. William answers questions, tells stories and even poses for pictures.

And best of all for some people, is the Ghost tour. The Ghost tour takes place in the evenings, entirely within the confines of the haunted 12th century edifice. It is not recommended for children under 14. It is spooky and that's the best part. It is so spooky William Shakespeare will not take the tour himself (he said so).

Ghostly visions have been reported by some visitors but the management assures us there has never been an attack by a ghost. The management also guarantees there will not be an attack by anyone living. (Anyone LIVING, that is.) The tour relates the history of ghostly visitations in the building and around the town.

Visitors are taken through the Ghost tour by a guide with a lantern. In each room he/she will talk of the ghostly history of the place. The museum is over 400 years old. The rooms have low ceilings and beams and floors slightly warped. This type of thing is not recommended for those who are nervous or who have physical limitations.

For those who are not overly impressed with the Ghost tour, there will be a Halloween "Terror" tour. Be sure to come at Halloween. For the psychic fans there is a Victorian seance. A seance in a haunted house! Will William be there? He does not answer calls. Well, there's always fortune telling. That's even approved for kids.