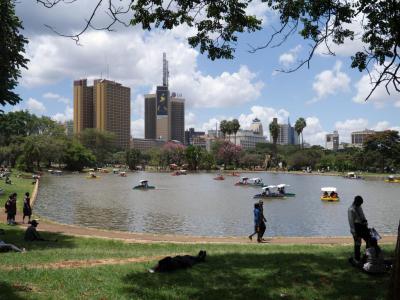 Uhuru Park, also known as the Freedom Park, is one of the city’s chief meeting places for locals to relax, filled with well-tended gardens and shady trees forming a green lung within a walking distance of the city center. There is an artificial lake in the park where many visitors like to take boat rides or walk over the foot bridges to the island. Wandering through the park you are likely to see many people enjoying picnics, outdoor sports and even dance groups rehearsing.

From the park you are able to take in a vista of the city and there are a number of monuments to visit. Uhuru Park is also well known as being a location for political protests and gatherings. Indeed, protests, held by Wangari Maathai to save the park from demolition by President Moi, led to her being awarded the Nobel Peace Prize and there is a monument erected in the park to honor her. The independence monument is important to the Kenyan people as it was the site upon which their independence was declared at midnight December 12th, 1963. The monument depicts a group of freedom fighters at the base and a column rising to 24 meters, upon which is a dove of peace.
Image Courtesy of Wikimedia and Bobokine.