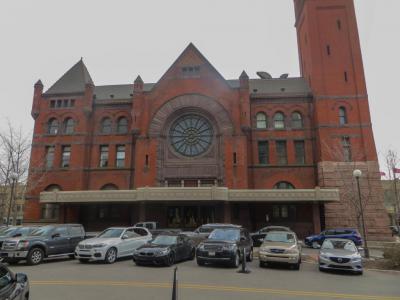 The Indianapolis Union Station is an intercity train station in the Wholesale District of Indianapolis, Indiana. The terminal is served by Amtrak's Cardinal line, passing through Indianapolis three times weekly.

Indianapolis was the first city in the world to devise a union station, in 1848. The station building opened on September 20, 1853 at 39 Jackson Place, operated by the Indianapolis Union Railway. A much larger Richardsonian Romanesque station was designed by Pittsburgh architect Thomas Rodd and constructed at the same location beginning in November 1886 and opening in September 1888. The head house (main waiting area and office) and clock tower of this second station still stand today.

The three-story Union Station is built of granite and brick trimmed with Hummelstown brownstone,[not specific enough to verify] with a battered water table and massive brick arches characteristic of the Romanesque. It features an enormous rose window, slate roof, bartizans at section corners, and a soaring 185-foot (56 m) clock tower. The 1888 station included a large street-level iron train shed.

The station was placed on the National Register of Historic Places on July 14, 1982. Beginning in 1984, the facility was renovated and converted from its primary use as a railroad station to a festival marketplace. Union Station became a collection of restaurants, nightclubs, and specialty stores that included an NBC Store and a model train retailer. Statues of individuals who might have been seen in the railroad station in prior years were installed throughout the facility. The 273-room Crowne Plaza Hotel took up much of the western portion of the train shed, with 26 of its rooms being housed within thirteen old Pullman cars.

After 1997 the city of Indianapolis was forced to take ownership of Union Station and began to try to find another reuse for much of the building. After some time, it began leasing out space for a wide variety of purposes, including office use and an indoor go-kart track.

The 1888 station building is mostly leased for offices to pay for the building upkeep. The city struggled with finding a use for the building that is financially viable and high-profile. The Crowne Plaza Hotel still operates in the train shed structure, and leases out the main concourse, the Grand Hall, for weddings and other events.
Image Courtesy of Flickr and David Wilson.
Sight description based on Wikipedia.