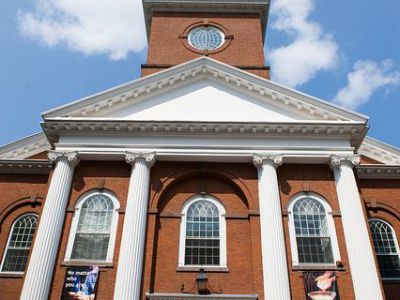 Originally known as the North Church, the United Church on the Green is the third of the three New Haven Green Park churches. It was constructed in 1814 in a Federal style by architect David Hoadley. In 1884, it merged with Third Church to create a United Church.

The United Church on the Green features tall white columns in combination with brick walls, thus creating an impressive sight. The steeple of the church has served as a model for other church steeples in the U.S. Another prominent feature of this temple is a pipe organ.

*** Amistad Freedom Trail ***
Several members of both congregations were ardent abolitionists and played an active role in assisting New Haven’s free black community. Among them were the Reverend Samuel Dutton, Nathaniel and Simeon Jocelyn, who was one of the three founding members of the Amistad Committee formed to raise a defense for the Amistad captives, as well as Roger Sherman Baldwin, member of North Church and a New Haven attorney, who offered legal services to the Mende African captives. After the captives were freed, the Amistad Committee arranged for their return to Africa. Commemorating that event is a memorial plaque inside the church.
Image Courtesy of Flickr and Daniel Hershman / www.hershmanphoto.com.