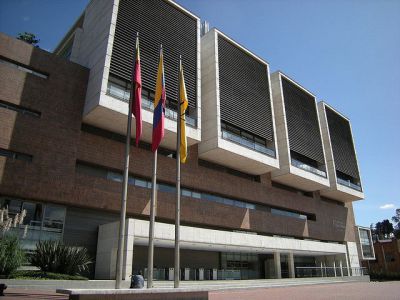 The University of the Andes is a coeducational, nonsectarian private university located in city centre Bogotá, Colombia. Founded in 1948, the University has 9 faculties: Administration, Architecture and Design, Arts and Humanities, Sciences, Social Sciences, Law, Economics, Engineering and Medicine, which offer undergraduate and postgraduate programs; and the Center for Research and Training in Education (CIFE), and the Interdisciplinary Center for Development Studies (CIDER), for postgraduate programs. In addition, the University includes the ﬁrst private school for public affairs - the Alberto Lleras Camargo Government School, which is named after a former President of the Republic and Rector of the University. Representing a high quality education and an elite institution, it is ranked as a top tier university in Latin America.

The university was founded by a group of Colombian intellectuals led by Mario Laserna Pinzón, and was the first university in the country to be nonsectarian. Today, the University seeks to model itself after major research universities through strategies such as greater focus on graduate education and research. As a result of this, the university offers doctoral programs and new research facilities have been built on campus. The University of the Andes has achieved wide international visibility in the early twentyfirst century: in 2011 it was included among the top 500 universities worldwide. It was the only Colombian university included in the scale and it's included in the group of the top 10 Latin American universities.
Image by Leandro's World Tour on Flickr under Creative Commons License.
Sight description based on wikipedia