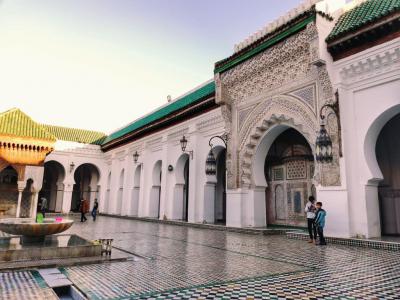 University and Mosque of al-Qarawiyyin, Fes (must see)

The University of al-Qarawiyyin or Al Quaraouiyine is the oldest existing, continually operating higher educational institution in the world according to UNESCO and Guinness World Records and is occasionally referred to as the oldest university by scholars. It was founded by Fatima al-Fihri in 859 with an associated madrasa, which subsequently became one of the leading spiritual and educational centers of the historic Muslim world.

The al-Qarawiyyin played a leading role in the cultural and academic relations between the Islamic world and Europe in the middle ages. The cartographer Mohammed al-Idrisi (d. 1166), whose maps aided European exploration in the Renaissance is said to have lived in Fes for some time, suggesting that he may have worked or studied at al-Qarawiyyin. The University has produced numerous scholars who have strongly influenced the intellectual and academic history of the Muslim and Jewish worlds.

Compared with the Hagia Sophia in Istanbul or the Jameh Mosque in Isfahan, the design of the mosque is austere. The columns and arches are plain white; the floors are covered in reed mats, not lush carpets. Yet the seemingly endless forest of arches creates a sense of infinite majesty and intimate privacy, while the simplicity of the design complements the finely decorated niches, pulpit and outer courtyard, with its superb tiles, plasterwork, woodcarvings and paintings.

Why You Should Visit:
Non-muslims can see the traditional courtyard with the washing area (only for men) and the prayer area. The mixture of indoor and outdoor space truly makes the place amazing.

Tip:
In exchange for a little tip, the Muslim guardians can take your camera/phone and walk inside the mosque taking random photos, which can give you a feeling of what you're missing.
Image by Khonsali on Wikimedia under Creative Commons License.
Sight description based on wikipedia