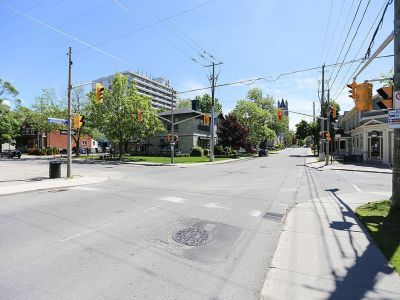 The University District (also referred to as the Student Ghetto) is a neighbourhood in Kingston, Ontario, Canada. It encompasses and surrounds Queen’s University and is largely inhabited by students and employees of the University. The area is officially bound by Nelson & Collingwood Street to the west, Princess Street to the north, Division & Barrie Street to the east, and King Street to the south. The University District is characterized as one of the most diverse, walkable and lively neighbourhoods in the City of Kingston. Within its borders, Queen's University offers publicly accessible athletic facilities, art galleries, museums and libraries. The District also contains other institutions such as KCVI, Kingston General Hospital, and many local businesses. The density of rental housing for students in the area coupled with its very close proximity to the university makes its existence a pull factor for prospective students who are considering attending Queen's. Throughout its history, the area has had a reputation of being loud and active, especially on weekend nights and during the annual Homecoming celebrations. Over the years, this created a significant amount of tension between students and non-student residents. Today, strong partnerships exist between City staff, City councillors, the Alma Mater Society, the Kingston Police Force, and Queen's University, which have largely curtailed these issues.
Image Courtesy of Wikimedia and YourmuniciPAL.
Sight description based on Wikipedia.