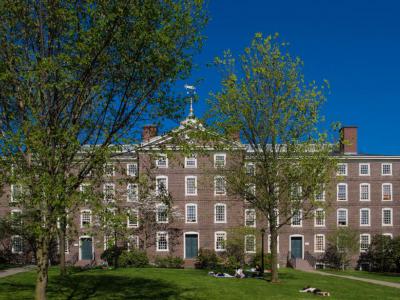 University Hall is the first and oldest building on the campus of Brown University in Providence. Built in 1770, the building is one of only seven extant college buildings built prior to the American Revolution. According to architectural historian Bryant F. Tolles Jr., the structure is "one of the genuine icons of early American collegiate architecture."

The building occupies a central part of the university's front campus and is framed by the Van Wickle Gates.

Built in 1770, University Hall was originally known as the College Edifice. The building was constructed on a piece of land that had belonged to the original Brown family ancestor and co-founder of Providence, Chad Brown (c. 1600–1650).

Designed in the late Georgian style, the building is constructed of red brick and decorated with white-painted, wood trim. The facade of the structure is relatively unornamented with the exception of plain brick belt courses which mark the building's stories. Brick segmental arches frame the structure's evenly spaced, double sash windows.

Compared to coeval academic buildings, University Hall is of modest and utilitarian character.

During Independence War, the building was used to house French and other revolutionary troops led by General George Washington and the Comte de Rochambeau during the wait to commence the celebrated march of 1781 that led to the Siege of Yorktown and the Battle of the Chesapeake.

The building has been used for many different purposes at the University over the years. It currently houses the office for the president of Brown on the first floor, facing the middle campus in space first occupied by the Commons, along with other administrative offices.

The building was designated a National Historic Landmark in 1962, recognizing it as an excellent example of 18th-century academic architecture, and as key place in the life of educator Horace Mann (1796–1859), who graduated from Brown in 1819 and taught there until 1821, before embarking on a career of educational reform.
Image Courtesy of Wikimedia and Kenneth C. Zirkel.
Sight description based on Wikipedia.