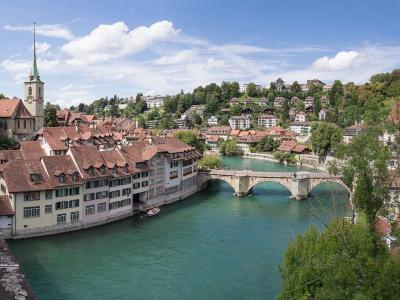 Untertorbrücke (Lower Gate Bridge) is a historic stone arch bridge connecting the Old City to the eastern bank of Aare river. Initially built in 1256, it is the oldest of Bern's Aare bridges and was the city's only bridge up until the middle of the 19th century. For centuries, the bridge served as a vital link between Bern and the territory east of the Aare.

The need for a river crossing became urgent soon after the founding of Bern in 1191. The young city-state's first attempt at building a wooden bridge over the Aare triggered a war with Count Hartmann of the powerful House of Kyburg that controlled the territory east of the Aare. Thanks to a peace mediated by Savoy, the first Untertorbrücke could be completed in 1256. In 1288, it survived a heavy attack during King Rudolph of Habsburg's second siege of Bern.

The bridge was built from oak wood and is believed to have been at least partially covered. It was protected by a fortified tower to the east, carried a guard house in its center and may also have been built over with other houses or shacks.

A 1460 flood of the Aare caused severe damage to the bridge, and the city government decided to rebuild it in stone, requesting the services of a work master from Zürich who had then recently completed a bridge over the Limmat in Baden. The piers appear to have been complete and the bridge largely usable by March 1467, when the bridge chapel was consecrated. The construction was then halted because of massive cost overruns and intermittent wars. It resumed in 1484–87 with the completion of the fortifications, the bridgehead drawbridge and the access roads.

Up until the 1750s, the bridge's fortifications were repeatedly improved. The parapet was strengthened with crenellated stone walls in 1517, and the northern parapet was expanded to a covered battlement with a double layer of embrasures in 1625–30.

In the 18th century, the medieval fortifications of the Untertorbrücke had lost their military value and increasingly became an obstacle to traffic. In 1757, the bridge was thoroughly renovated and a competition was held for a remodeling of the bridge and its surroundings. The city councils, however, rejected all the fanciful plans that were submitted and settled on a cheaper option: all fortifications, including battlements and pillar gates, were removed and new decorative gates were built at the bridgeheads, including a baroque triumphal arch at the eastern end.

From 1818 on, more changes were made to the bridge's superstructure. The sandstone parapets were replaced with iron railings, the inner gate (now isolated) was removed and the eastern moat was filled with earth, obviating the outer drawbridge. The last substantial change to the bridge's appearance was made in 1864, when the eastern gate was pulled down because it inconvenienced the residents of the medieval guard tower, the Felsenburg, which had since been converted for residential purposes.

In its current form, the bridge is reduced to the medieval construction core, with no traces of the once extensive system of fortifications or imposing baroque gates.

Today no longer a bridge with active usage, with grace and dignity, Untertorbrucke silently serves as a witness of Bern's development and progress.
Image by Sergey Ashmarin on Wikimedia under Creative Commons License.
Sight description based on wikipedia