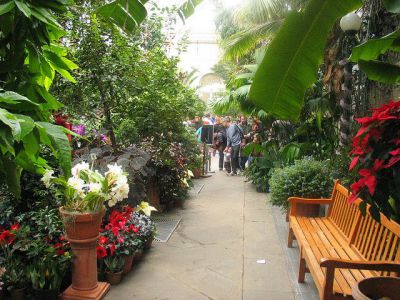 The United States Botanic Garden (USBG) is a botanic garden on the grounds of the U.S. Capitol in Washington, D.C., near Garfield Circle. The Botanic Garden is supervised by Congress through the Architect of the Capitol, who is responsible for maintaining the grounds of the U.S. Capitol. The USBG is open every day of the year, including federal holidays. It is the oldest continually operating botanic garden in the United States. The USBG proper consists of three locations: the Conservatory, Bartholdi Park, and the Production Facility. The historic Lord & Burnham greenhouse, built by the Architect of the Capitol in 1933, contains eight garden rooms under glass, totaling 28,944 square feet of growing space. In 2001, the Conservatory re-opened after a four-year renovation that required it to be completely dismantled and rebuilt using 21st-century building standards.

Why You Should Visit:
It's less about seeing how plants grow than making use of the benches, tables, and chairs that the park has to offer – not to mention wonderful views of the Capitol.

Tip:
If you're packing a lunch for your DC tour, be sure to eat it here.
Come during Christmas, too! The trains and mini wooden versions of world landmarks are worth the extra crowds.