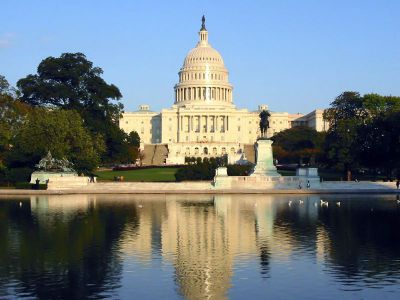 The United States Capitol stands at the opposite end of the National Mall from the Washington Monument. This huge building holds the House of Representatives in the south wing, and the Congress in the north wing. There are 540 rooms, five floors and the beautiful Capitol Rotunda which additionally houses art and sculptures. This artwork depicts events and figures from American history.

After much wrangling about the design, the Capitol cornerstone was laid by President Washington, who was dressed for the occasion in full Mason attire, on September 18, 1793. Completed in 1811, the Capitol was partially damaged in August 1814 during the burning of Washington in the course of the War of 1812. The burnt down portions were rebuilt and the Rotunda was added in 1826. In the 1850s the Capitol was expanded further with a new cast-iron dome added to replace the wooden Rotunda, following which several more renovations and expansions have been made. Among them is The Apotheosis of Washington fresco painted on the inside of the dome, visible through the oculus from the Rotunda floor.

The Capitol is open to visitors and offers free tour. Tickets are available at the Capitol Visitor Center on the first come-first served basis. This center is new, having opened in 2008. There is a 15-minute orientation film about the Capitol that is well worth viewing. A cafeteria, two gift shops, and restrooms are also available on site.

Visitors to the Capitol can watch Congress in action from designated galleries. Passes are available from the offices of Senators and Representatives. If visiting when Congress is in session, be sure to contact your local official and see government in action.

Tip:
First off, book your 45-min tour early to avoid missing out and to give yourself a bigger range of time slots.
You'll still have to go to the desk to pick up your ticket by showing the online receipt on your phone.
Get there 30-45 mins before your tour due to security checks before entry (food & drinks are prohibited).
Don't miss the opportunity to see the House of Reps and the Senate in action BUT you will need more passes AND if you are not American, you will need proper ID.
Overseas visitors apply for the passes at the Senate Appointment Desk and the House Appointment Desk inside the Capitol Building (pretty easy and quick to apply).
When you've finished your visit, use the tunnel just before the exit to go directly to the Library of Congress (no additional security check).
Interestingly, both the east side and the west side of the Capitol can be designated as the front, so just be aware that “front” is not the best descriptive designation here.