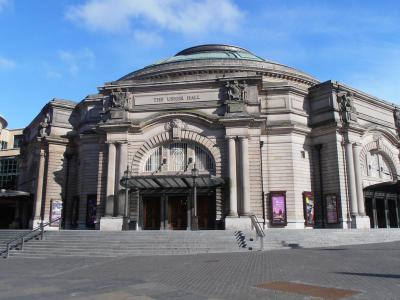 Just before he died in 1896 Andrew Usher, a prominent brewery owner, donated £100.000 to the city so that a concert hall, named the Usher Hall in his memory, could be built.

The hall is a mixture of Victorian Gothic and Beaux Arts style and was built by Stockdale Harrison and Howard Thompson. It was opened by Andrew’s widow in 1914 and King George V and Queen Mary laid memorial stones on each side of the entrance on Cambridge Street.

The building was renowned for its innovative curved walls and domed roof. Two figures by Harry Gamley represent Inspiration and Achievement. The three other figures on the exterior of the hall are by Crossland MacClure and symbolise “Music of the Woods”, “Music of the Sea” and the “Soul of Music”.

Inside, the plaster panels are also by Harry Gamley and they depict literary and musical personages: Robert Louis Stevenson, Robert Burns, Sir Walter Scott among the literati and Bach, Brahms, Grieg, Handel and Mozart among the musicians.

When it opened, the hall was the favourite venue for classical concerts, with its wonderful acoustics. Today you can still enjoy classical music here, as well as rock, pop, Jazz and Blues concerts. The Freedom of the City ceremonies are held in the hall, which is also used for school concerts and conferences.
Image by Stuart Caie on Wikimedia under Creative Commons License.

While in Edinburgh, discover the popular avenues, boulevards and streets that lead to its most famous squares. While exploring these streets, you can find a copious amount of historic and religious edifices, fashion boutiques, classy restaurants, famous market areas, and other sites. Check out the most popular Edinburgh squares and streets in the following self-guided tour.