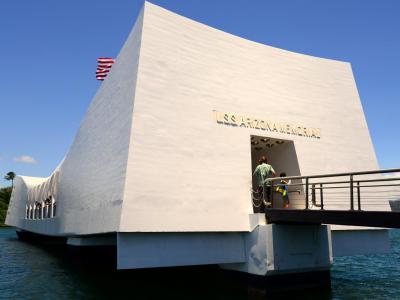 The USS Arizona Memorial is a white marble structure that straddles the wreck of the USS Arizona, sunk during WWII in the Japanese attack on Pearl Harbor. The Memorial was designed to commemorate all of the lives lost in the attack.

The USS Arizona lies directly beneath the Memorial. After the ship was sunk, the navy salvaged all that it could from the vessel. The components that weren't able to be salvaged remain there today. These include the ship's fuel tanks. Physical damage and corrosion from salt water cause the tanks to leak small amounts of oil, which rise to the surface to produce visible oil slicks. These are called “black tears” or the “tears of the Arizona.”