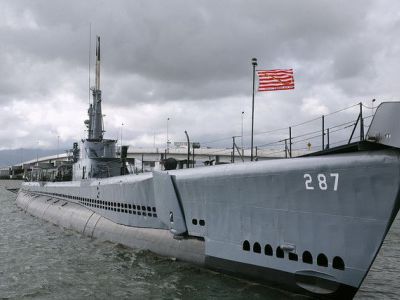 The USS Bowfin was a Balao-class submarine used extensively from 1942 to 1971. It is one of only 15 U.S. World War II-era submarines still in existence. The USS Bowfin went on nine patrols ranging from Japan to Australia before being decommissioned and placed in reserve in 1947. In 1980, the USS Bowfin was moved to her current location beside the USS Arizona Memorial Visitors' Center. Visitors can tour the submarine with an audio narration of life in the vessel during WWII.

The USS Bowfin Museum has several different exhibits, including the Waterfront Memorial. This lists 52 submarines that were lost during wartime, as well as all of the men that were on board. There's also a Japanese human torpedo on display. This weapon was a manned suicide torpedo used exclusively by the Japanese during WWII. It contained nearly 4,000 pounds of TNT and had no escape hatch for the pilot. These torpedoes were called “Kaiten,” a word that means “Return to the sky,” and were meant to be launched from a ship or submarine towards other naval craft. While the Kaiten were in use, eight launching craft and nearly nine hundred human lives were lost. In addition to the Waterfront Memorial and Kaiten display, the USS Bowfin Museum is filled with submarine weapons systems, photos, battle flags, and vintage recruitment posters.

Why You Should Visit:
If you have time while you are at Pearl Harbor, are not claustrophobic, and haven't been on a submarine before, then you should definitely go on this one.
The audio tour they give you with the price of admission is very good and includes several personal accounts from Marines who served on the Bowfin.

Tip:
Remember to watch out and not hit your head on all the low clearance spots (if you are over 6'3", be prepared to duck often).
Make sure you visit the museum before touring the Bowfin for the obligatory history of submarines, or save your ticket and do the museum later.